By CCMASeptember 9, 2021CCMA News
No Comments

“I was so thrilled to learn that Patricia and Randy are to be inducted into the Country Music Hall of Fame this year,” said Amy Jeninga, President, CCMA. “They have both been trailblazers throughout their careers and I look forward to celebrating this career milestone as a part of Country Music Week this year.”

Throughout her musical career, songwriting has always been an integral part of Conroy’s success. From her debut album Blue Angel, written largely herself, it became apparent songwriting was in her blood. She went on to craft hits like “Direction of Love,” “Keep Me Rockin,” “Bad Day for Trains,” “I Don’t Wanna Be the One” and many more. Touring extensively throughout her career, Conroy has also spent a great deal of her life sharing her incredible talents with others. In the past decade alone, she has lent her award-winning songwriting skills to artists such as Jimmy Rankin (The Rankin Family), Michelle Wright,​​ Reba McEntire, Trisha Yearwood and Lady A, proving her position as one of Canada’s top female artists and songwriters.

“This is such a magical moment in my career,” expressed Conroy. “I’m full of emotion and beyond grateful for this incredible honour. So looking forward to celebrating with everyone in person this November!!”

With more than 5 decades of industry experience, Randy Stark has been credited with building some of Canada’s biggest country careers. Beginning his work at London Records in Calgary (1972), Stark went on to hold positions at a handful of labels, including A&M Records and GRT, before landing at Warner Music Canada in 1980. Here, Stark earned the title of VP, Marketing and Promotion where he was responsible for a country roster that included George Fox, Paul Brandt, Patricia Conroy, The Johner Brothers and alt-country icons Blue Rodeo. During his tenure at Warner Music Canada these acts alone accounted for over 2.5 million units sold, 13 JUNO Awards, 15 CCMA Awards, 33 Top 10 singles, 10 #1 singles, 11 BCCMA Awards and 17 SCMA Awards.

Owning and operating his own radio charting service (Trax Report, 2007-2018), Stark also played a recognizable role in the radio careers of artists such as Deric Ruttan, Gord Bamford, Bobby Wills, Michelle Wright, Aaron Pritchett and Clayton Bellamy, among others. His dedication to providing Canadian artists with an international stage was evident in his roles as Australian Contemporary Country Music Coalition Director (2001-2003), CMA Nashville Director (2001-2003) and as a valued consultant for CMT Canada (2002-2003).

Joining the Country Music Association of Ontario Board of Directors in 2012, Stark has spent the duration of his career behind the scenes, building opportunities for artists at all levels of their careers.

“I’m honoured to be chosen as this year’s inductee into the Canadian Country Music Hall of Fame, Builder category,” said Stark. “For me, it’s never been about personal recognition or accolades, I simply tried to do the best I could for my artists and clients. To be recognized by my peers and the Canadian Country Music industry is a very humbling experience and I shall accept this award with all of you in mind.”

Inductees of the Canadian Country Music Hall of Fame are chosen annually by a selected Hall of Fame Electors Committee, composed of over seventy (70) industry peers. The next three-stage voting process will take place March — May 2022. The inductee in the Builder category receives the Canadian Country Music Hall of Fame Stan Klees Builder Award, established in recognition of RPM Magazine co-founder, Mr. Stan Klees, and his pioneering efforts in the creation of the CCMA Awards Program.

The Canadian Country Music Hall of Fame induction ceremony will take place during Country Music Week 2021 in London, ON from November 26 — 29, 2021. 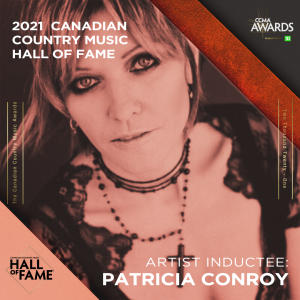 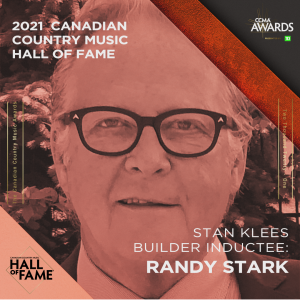