Both are set to perform with Blanco Brown debuting his brand new single “I’ll Never” while Tenille Townes celebrates the release of her new single “The Last Time” with it’s first national broadcast!

THAT’S NOT ALL! 👀
WE ALSO OFFICIALLY DROPPED THE FULL PERFORMER LINE-UP! 🎶

All eligible voting members of the CCMA will receive an email today, July 20, 2022 with voting log-in information.

The email will come “from” CCMA Awards, and the subject line will read 2022 CCMA Awards Third Ballot Voting Site is Now Open.

If you are an eligible CCMA Member and you do not receive an email with a PIN and directions on how to log into the voting site by Friday, July 22, 2022, or should you experience any technical issues with the CCMA Awards voting site, please contact the Yangaroo/DMDS Customer Support Team directly at 1-866-992-9902 or [email protected]. The Yangaroo Customer Support Team is available from 9:00 a.m. to 8:00 p.m. ET, Monday through Friday.

For detailed information on the various components of the CCMA Awards Program, CLICK HERE.

Country Music Week 2022 in Calgary, Alberta is fast approaching and we’d love for you to join our Volunteer Team!

Country Music Week is made up of three components: a music festival, the CCMA Awards Show Presented by TD, as well as an industry conference which allows the Canadian country music industry to honour those working behind the scenes. We invite the public to volunteer and participate in the 2022 Country Music Week. Volunteers are an integral part of the events and you will be able to work alongside passionate music-lovers and participate in promoting and honouring Canadian country music.

Country Music Week returns to Calgary for the tenth time September 8-11, 2022! The CCMA presented by TD will take place on Sunday, September 11, in Calgary.

If you want to get in on the fun and have an event that you are thinking of hosting during Country Music Week, fill out the form below to be considered for our event listings!

CCMA Specials: Are you a local restaurant, bar or hotel? Want to get in on the fun during the Canadian Country Music Awards? Submit your food/drink special, or Country Music Experience here to get it on the fun!

Friends of CCMA: All non-CCMA sanctioned shows happening in and around official venues and programming. Don’t fall into one of the categories above, but want to get in on the fun? Pitch us your idea by clicking here or the button below.

Off Country – Call for Artist Submissions

To celebrate all the music genres and styles that are inspired by similar storytelling tradition as country music, Off-Country Music Series will run during Country Music Week (September 8 -11, 2022) and showcase approximately 50 acts in venues along the Music Mile and in surrounding venues in Calgary.

This is a paid performance opportunity. The majority of programming will prioritize Calgary-based artists, but we welcome any artists outside of Calgary to apply! Off Country will feature live music from artists who primarily perform country music on the fringes: Alt-Country, Americana, Roots, Singer-Songwriter, Blues, Rock, etc.

This opportunity is for acts who mostly perform original music and are emerging to mid-level in their careers.
All ages are welcome to apply as we will be programming an emerging artist showcase as well as presenting in some all-ages venues.

Please fill out this form BY AUGUST 2 to be considered.

Voting now open for SiriusXM’s Top of the Country Competition 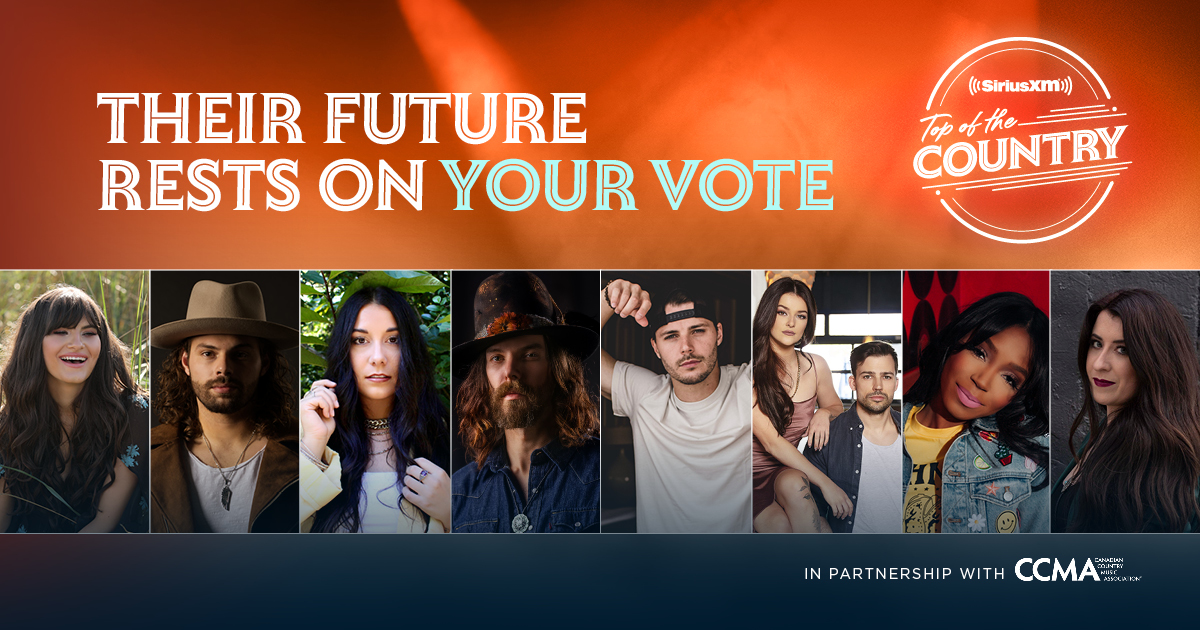 Help decide who will vie for $25,000 and major showcase opportunities

TORONTO – June 2, 2022 – SiriusXM Canada is inviting Canadians to help choose the next big star in country music as voting opens for the fourth annual SiriusXM Top of the Country competition, in partnership with the Canadian Country Music Association® (CCMA). The public will decide which of the eight semi-finalists will make it to the final three, to perform at some of Canada’s biggest country music events, embark on an exclusive songwriting trip and compete for the grand prize of $25,000.

Tyler Joe Miller of Surrey, BC, solidified his place as one of Canada’s most loved country musicians when he was named the 2021 SiriusXM Top of the Country winner. “I have always loved performing and will be forever grateful for SiriusXM’s Top of the Country competition that gave me an opportunity to realize my dreams,” said Miller. “Having the support of Canadian music fans was exhilarating and I’ll never forget it.”

The 2022 SiriusXM Top of the Country semi-finalists are:

As part of developing the artists, SiriusXM took the semi-finalists into the studio to record their original song and create a behind the scenes video of the contestants. Beginning at 10 a.m. ET today through June 14, country lovers can watch the recordings and cast their votes daily for their favourite artist at siriusxm.ca/topcountry.

“Canada has a country music talent pool that is overflowing with potential and our eight semi-finalists all have star power,” said Jeff Leake, Director, Music, Podcasts & Listenership Analytics, SiriusXM Canada. “Country music fans are in for a treat as they discover some impressive talent and vote for their favourite new artists. Their support will help determine who will be fighting for the title of Canada’s next winner of SiriusXM’s Top of the Country.”

The three artists with the most votes will move to the final round and participate in exclusive mentorship sessions and showcases with industry leaders, a SOCAN songwriting trip and performance opportunities at some of Canada’s biggest music events.

The grand prize winner will be chosen during CCMA’s Country Music Week 2022 in Calgary, Alberta from September 8-11. The finalists will perform live at SiriusXM’s Top of the Country Finale, airing live on SiriusXM Canada, and will culminate with a soon-to-be-announced headline act making it one of the most exciting nights in Canadian country music!

SiriusXM’s Top of the Country in partnership with the CCMA is part of SiriusXM’s ongoing tradition of promoting and elevating the best emerging Canadian music. SiriusXM continues to offer a leading platform for Canadian artists through its significant financial contributions and reach.

Sirius XM Canada Holdings Inc., operating as SiriusXM Canada, is the country’s leading entertainment company. SiriusXM creates and offers commercial-free music; premier sports talk and live events; comedy; news; and exclusive talk and entertainment. SiriusXM is available in vehicles from every major car company and on smartphones and other connected devices as well as online at siriusxm.ca.

SiriusXM radios and accessories are available from retailers nationwide and online at SiriusXM. In addition, SiriusXM Music for Business provides commercial-free music to a variety of businesses. SiriusXM is also a leading provider of connected vehicles services, giving customers access to a suite of safety, security, and convenience services including automatic crash notification, stolen vehicle recovery assistance, enhanced roadside assistance and turn-by-turn navigation.

SiriusXM Canada has been designated one of Canada’s Best Managed Companies 13 years in a row and is currently a Platinum Club Member.

Established in 1976, the CCMA is a membership-based, not-for-profit organization committed to the promotion and recognition of Canadian country music. Built upon the foundation to educate, elevate and celebrate Canadian talent, the CCMA progressively heralds the spirit, community and creativity that country music fosters through year-round initiatives, culminating every fall with Country Music Week and the Canadian Country Music Association Awards. Sponsors of Country Music Week and the 2019 CCMA Awards Show include FACTOR, Canada’s Private Radio Broadcasters and the Government of Canada through the Department of Canadian Heritage’s “Canada Music Fund”, Radio Starmaker, the Government of Alberta, The City of Calgary and Tourism Calgary.

SADDLE UP, FRIENDS! WE HAVE A LIMITED-TIME EXCLUSIVE OFFER, Y’ALL

SADDLE UP, FRIENDS! WE HAVE A LIMITED-TIME EXCLUSIVE OFFER, Y’ALL 🤠

Free Limited Edition BACK IN THE SADDLE mesh back hat!

BE ONE OF THE FIRST TO BUY TICKETS TO THE 2022 CANADIAN COUNTRY MUSIC AWARDS
AND RECEIVE A FREE GIFT WITH PURCHASE AND A CHANCE TO WIN
AN INCREDIBLE UPGRADE ON YOUR TICKETS*
A COUNTRY MUSIC LOVER’S DREAM!

HERE’S HOW IT WORKS:
You will be snail-mailed a limited edition BACK IN THE SADDLE mesh back hat for every
purchase order. Attached to one of those hats will be a LUCKY HORSESHOE! Find the
lucky horseshoe and you’re eligible for the grand prize that includes a serious upgrade to
your tickets and access to the pre-show red carpet.

The CCMA is pleased to announce that rooms with our Calgary, AB hotel partners for Country Music Week 2022 are now available. We encourage you to book your accommodations early at one of our recommended properties to avoid disappointment in the event of sold-out occupancy.

If you’re a CCMA Member click here to access the CCMA room blocks at our host hotels in Calgary, AB.

The countdown to Country Music Week 2022 is on!

All eligible voting members of the CCMA will receive an email today, May 11, 2022, (email distribution begins at 10:00 a.m. ET), with voting log-in information.

The email will come “from” CCMA Awards, and the subject line will read 2022 CCMA Awards First Ballot Voting Site is Now Open.

If you are an eligible CCMA Member and you do not receive an email with a PIN and directions on how to log into the voting site by Friday, May 13, 2022, or should you experience any technical issues with the CCMA Awards voting site, please contact the Yangaroo/DMDS Customer Support Team directly at 1-866-992-9902 or [email protected]. The Yangaroo Customer Support Team is available from 9:00 a.m. to 8:00 p.m. ET, Monday through Friday.

For detailed information on the various components of the CCMA Awards Program, CLICK HERE.