By CCMANovember 29, 2021CCMA News
No Comments 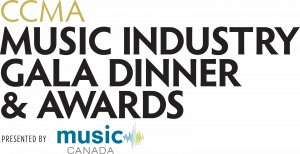 Taking home her first-ever CCMA Awards was Big Loud Records’ Brianne Deslippe (Industry Person of the Year presented by MNP) while Stephano Barberis collected his twelfth win in the Video Director of the Year category. The evening award ceremony also saw Ben Bradley and Matthew Atkins tie for a win in the Drummer of the Year category and Brett Kissel: Live At The Drive-In walked away with the Live Innovation Award, a new award handed out this year to celebrate a live, virtual event or concert series that strove to continue to celebrate live Canadian country music during the global pandemic. The evening was made whole with Jennifer Campbell’s contributions to country radio being recognized as she was named Country Personality(ies) of the Year for 2021.

Adding to the evening’s excitement was the announcement of Calgary as the 2022 CCMA Awards Host City. Scheduled for next fall, Country Music Week 2022 will culminate with the CCMA Awards Show, to take place at the Scotiabank Saddledome next Fall.

“We are thrilled that the Canadian Country Music Awards and Country Music Week will be returning once again to Calgary in 2022,” said Jeff Hessel, Senior Vice President of Marketing at Tourism Calgary. “Building on the success of the 2019 event, we are excited to showcase Calgary’s diverse music scene and growing reputation as the ultimate host city.”

Interactive Artist or Group of the Year
Lindsay Ell

Retailer of the Year
Apple Music

PRS Guitars Video of the Year
Make A Life, Not A Living – Brett Kissel

The 2021 CCMA Awards presented by TD, hosted by Lindsay Ell and Priyanka will livestream exclusively on the Global TV App and Prime Video on Monday, November 29 at 8 p.m. ET / 5 p.m. PT and will be available to watch until 1 a.m. ET / 10 p.m. PT following the live presentation. The Award Show will also be available across Corus-owned radio stations Country 105 (Calgary), CISN (Edmonton) and Country 104 (London) on Monday, November 29 at 8 p.m. ET / 5 p.m. PT, with an encore presentation of the show airing Friday, December 3 at 9 p.m. ET/PT on Global and available to stream on demand with STACKTV and the Global TV App.

Tickets to the 2021 CCMA Awards presented by TD continue to be available for purchase at budweisergardens.com. For each ticket sold, $1 will go directly to the CCMA Foundation, the charitable arm of the Canadian Country Music Association. Funds raised will be leveraged in support of The Unison Fund and MusiCounts.