LIVE FROM LONDON, ON
6-TIME 2021 CCMA AWARD NOMINEES THE REKLAWS
TO BE JOINED BY SACHA FOR FIRST BROADCAST
PERFORMANCE OF VIRAL SMASH HIT

CRIA Gold-certified and multiple CCMA Award nominee, JoJo Mason will return to the CCMA Awards stage this November. With his brand-new seven song EP Sky Full of Stars out now, fans are encouraged to stay tuned for more exciting news from Mason surrounding his involvement in this year’s CCMA Awards.

Stepping onto the CCMA Awards stage for the first time is chart-topping 4-time 2021 CCMA Awards nominee Tyler Joe Miller. Becoming the first independent Canadian country artist to reach #1 at radio with his first two singles ‘Pillow Talkin’’ and ‘I Would Be Over Me Too,’ Miller will also be competing to take home the title at the SiriusXM Top of the Country Finale concert during Country Music Week 2021..

Three-time consecutive CCMA Award winning Female Artist of the Year, Jess Moskaluke is a JUNO Award winning, PLATINUM-selling artist. The multiple CCMA Award nominated artist Moskaluke is celebrating the success of her most recent release The Demos, with her latest single ‘Nothing I Don’t Love About You’ currently climbing the charts at country radio.

Leading the nominations for the 2021 CCMA Awards with 6 nods, The Reklaws will take the stage in London for their 4th CCMA performance since their breakout on the scene. The duo has garnered 3 JUNO nominations, 3 CCMA Awards, 2 #1s at Canadian Radio, 210+ Million Global Streams and more GOLD Records than any other Canadian country artist since 2017. They will be joined by CMT’s Next Women of Country Class of 2021 member, Sacha, to perform their viral TikTok hit “What the Truck,” which amassed a record-breaking on-demand Canadian streams in its first week and became the fastest Canadian country song to earn GOLD-certification in the streaming era. 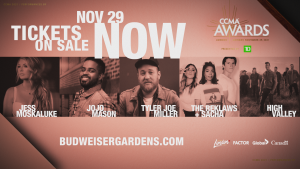 Tune-in details for the upcoming 2021 CCMA Awards presented by TD will be announced early next week. Fans are encouraged to stay tuned via socials.

Tickets to the 2021 CCMA Awards presented by TD are available for purchase at budweisergardens.com. For each ticket sold, $1 will go directly to the CCMA Foundation, the charitable arm of the Canadian Country Music Association. Funds raised will be leveraged in support of The Unison Fund and MusiCounts.

For Lindsay Ell, MacKenzie Porter and The Reklaws: