LONDON, ON (November 15, 2021) — (November 19, 2021) — In just over 10 days Canada’s biggest country stars will land in London, ON for the 2021 CCMA Awards presented by TD. Today the Canadian Country Music Association® and media partner Corus made this countdown even more exciting with the announcement of presenters and special guests for this year’s night of celebrations.

Bringing live music back to London UNESCO City of Music in a BIG way, the 2021 CCMA Awards presented by TD will livestream exclusively on the Global TV App and Prime Video on Monday, November 29 at 8 p.m. ET / 5 p.m. PT and will be available to watch until 1 a.m. ET / 10 p.m. PT following the live presentation. The Award Show will also be available across Corus-owned radio stations Country 105 (Calgary), CISN (Edmonton) and Country 104 (London) on Monday, November 29 at 8 p.m. ET / 5 p.m. PT, with an encore presentation of the show airing Friday, December 3 at 9 p.m. ET/PT on Global and available to stream on demand with STACKTV and the Global TV App. 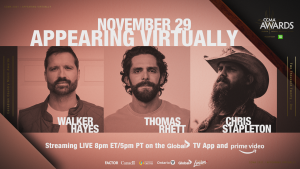 Tickets to the 2021 CCMA Awards presented by TD continue to be available for purchase at budweisergardens.com. For each ticket sold, $1 will go directly to the CCMA Foundation, the charitable arm of the Canadian Country Music Association. Funds raised will be leveraged in support of The Unison Fund and MusiCounts.