DON AMERO, LINDSAY ELL, ROBYN OTTOLINI AND TENILLE TOWNES CCMA AWARDS IN ANNOUNCED AS NEXT ROUND OF 2021 CCMA AWARDS PRESENTED BY TD PERFORMERS

October 29, 2021 (Toronto, ON) — The countdown is officially on! With the 2021 CCMA Awards presented by TD landing in London, ON in exactly one month today, the Canadian Country Music Association® (CCMA) and media partner Corus Entertainment have announced another incredible list of performers. Turning up the volume on the stage at Budweiser Gardens for this year’s show will be Don Amero, Lindsay Ell, Robyn Ottolini and Tenille Townes.

Recognized and celebrated for his advocacy work, singer-songwriter Don Amero is a 3-time JUNO Award nominee and first ever advisor and Chair of the CCMA Equity, Diversity and Inclusion Committee. Set to head out on tour next month, Amero will join previously announced performers Tenille Arts, Tim Hicks, Dustin Lynch, MacKenzie Porter and Dallas Smith.

Earning five 2021 CCMA Award nominations Lindsay Ell has had an unmatched year. The most nominated female artist for this year’s awards, Ell has celebrated her first U.S. #1, saw her record “wAnt me back” achieve GOLD-status certification and garnered her second Canadian #1, all since stepping onto the CCMA Awards stage from Nashville in 2020. This fall, she will headline her first Canadian tour with support from Robyn Ottolini.

Quickly becoming one of Canada’s fastest rising stars, Robyn Ottolini has earned 60M+ global career streams to date, with her debut single “F-150” earning a Top 10 spot at country radio. Now a GOLD-certified artist, Ottolini is celebrating her first CCMA Award nomination this year, vying for a win in the Rising Star category at the 2021 CCMA Awards presented by TD.

Reigning Female Artist of the Year for two consecutive years, Tenille Townes will return to the CCMA Awards stage in 2021. With her most recent single earning high praise upon release, Townes is an 8-time CCMA Award winner, 2-time ACM Award winner and this year took home her first JUNO Award win in the Country Album of the Year category. 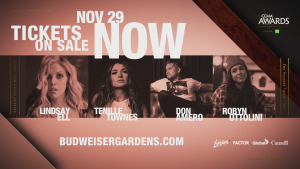 Additional talent announcements for the upcoming 2021 CCMA Awards presented by TD to come early next week. Fans are encouraged to stay tuned via socials.